Liability for Damages Caused by Drones in Texas: A 2021 Preview 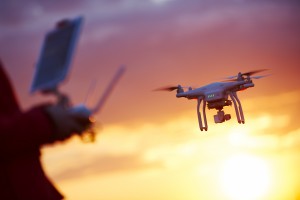 Every time a drone takes flight, either by an experienced pilot or a novice, there exists a personal injury case just waiting to happen.  As it is in Texas, there are no training requirements or regulations for a pilot to launch a drone (under a certain weight) and send it long distances just about anywhere desired.

I was once at a little league game when a cool, four-pronged drone (technically referred to as an Unmanned Aircraft System, or UAV) started to hover above the field of play.  I imagine the parent or kid probably got some good footage of the game.  Meanwhile, my thoughts at the time were, “If that thing loses control, or lands on a player or a spectator, someone is really going to get hurt.”

The technology is outpacing the price in the drone world such that most high powered drones can be purchased relatively cheaply.  It doesn’t take many searches to find ways to modify a purchased drone to override its safety mechanisms to make it go faster and further.

So, where does this leave the operator and the injured spectator if the drone lost control at the baseball field that day?

In Texas, a negligent drone operator could be liable for engaging in a dangerous or reckless act where he lacked proper training or experience should he crash his drone into a person or property, causing damage.  Depending on where the drone operator was controlling the drone, there may be premises’ liability or homeowner’s insurance that may cover such acts.  Specific exclusions on drone operation has not yet circulated into homeowner’s insurance policies yet, but will no doubt be subject to possible other exclusions that deal with negligent acts in current policies.

A new insurance tool called Unmanned Aerial Vehicles Insurance has started to become popular for responsible pilots (or their parents) who want to be covered for property damage and liability for injuries caused by the negligent use of a drone.  These policies are relatively cheap considering their coverage.  However, because consumers often associate a drone as a toy, and not a moving vehicle, few first time pilots purchase insurance for them.

It will be interesting to see what transpires in Texas as more people use drones in various and unintended ways.  Expect proposed legislation later in the year regarding insurance requirements for certain classes of drones.  Until then, traditional premises’ policies are the only possible remedy for someone injured by a drone.

Prev:  Accessibility and Responsiveness
Next: Lessons from a Loss